skip to main | skip to sidebar

One thing that is guaranteed to suck me into any fantasy series is a unique system of magic. L. E. Modesitt Jr's Saga of Recluce did this with their Order/Chaos dichotomy, the unusual qualities of Channeling was one of the things I found fascinating about all 13 books (so far!) of Robert Jordan's Wheel of Time series. Both great series and I'd highly recommend a read. Modesitt's Saga is less of a commitment, as most books in the series are standalone novels that cover separate events/characters over the span of a 3000 year timeline. There is the occasional continuation of a story, but that's normally no longer than a second book. We'll Just say Robert Jordan's WoT is quite a bit more of an investiture at 14 books at 500 to 1200 pages each..

I'm here to talk about those fantastic series, I came here to talk about one of my newest/most favorite fantasy series which would be the Mistborn series by Brandon Sanderson. Besides turning the common fantasy trope on it's ear by starting the series 1000 years after a Pre-Destined Hero had failed at saving the world, which has been plunged into complete and utter domination by the Lord Ruler(not a sarcastic name), Brandon Sanderson's form of magic, Allomancy, though limited in some ways, was still complex enough in it's potential that the first book of the following series has already started shifting what I thought I knew about Allomancy. The idea is that Allomancers can eat trace amounts of different kinds of metal and "burn" them to create specific effects and all the effects, as well as the metals they come from are related in different ways
The effects range from affecting the physical self, other people's emotions, physically pushing and pulling on metal objects, as well as seeing into the future or past. I won't go into too much detail, but I'd highly recommend the either in general and especially the Mistborn series in particular.

That said, what is your favorite fantasy series?

started around 9:49 PM No comments:

Day 1, Countrypersons, lend me your thoughts

Despite a wicked headache, I'm writing a blog post, albeit maybe less than the exceedingly witty I'm shooting for.

I love the steam punk genre. It's always fascinated me. I love the idea of mixing classic settings with technologically advanced elements. It doesn't even have to be a Victorian/steam tech mixture. I don't know if there is an overarching genre of mixing story elements as I described, but there should be.

One of my favorite PC games was called Arcanum: of Steamwork and Magick Obscura. It had a fantastic blend of arcane magic and high technology and just the right amount of Victorian flavor alongside fantasy creatures to suck me into the storyline. One of my favorite bits was the ogre butler you could have join your party temporarily in order to help you do a job for his master. Because of the way I work, I always assess videogames to find any and all of what my dad calls unintentional programming loopholes. Simply put, I'm working the system however I can. With this game in particular, I always found the technological discipline of explosives to be the most useful as the game had what seemed like a glitch where I could drop 3-5 AOE explosives on my enemies every round of combat where they could only attack me once each, allowing me to demolish groups of enemies that far outclassed me in hand to hand combat. That along with the fact I found a black market that I could sell my explosives to at a reasonable profit, limited only by the amount of cash the "clerk" had on hand, which would recoup in a few days in game time so I'd spend time making flash, smoke and frag grenades and sell as many as I could, go do a quest or two and come back to sell more. It was great, it didn't ruin the fun of the game, but still allowed me to progress at a relatively rapid pace financially.

One of my favorite things about the game was its system of magic vs technology. You actually had three general options for character development, which were always left open for you at the beginning. For the first of the two primary options, you could develop magical skills and schools of spells to cast, but as you became more powerful in your magic, all technological items and technological skills of your hirelings would be less and less effective if used by or on you. The reverse was true as well, the more tech oriented you developed your character, the less magic worked for your benefit. Neither of these reduced the damage taken in combat by enemies, probably to keep game balance, despite being logically inconsistent. The third character development option had no effect on the Tech/Magick scale, as it was merely developing badass combat skills and trudging through the game by cracking skulls and shooting baddies at almost every turn. Once I discovered the lure of explosives, it was always too tempting to pass up and try to develop the combat only skills.

This game is 12 year old and as most people who know me, know I love old videogames. I still enjoy the hell out of console games that are 20+ years old. I don't known if they'll ever wear out for me. It helps that I can play a lot of them on my Android phone, but just about convenience, I'd still play them regardless.

Thought For The Day

If you could live forever with a mediocre life, or you could be ridiculously happy for a long life, which would you choose?

started around 1:53 PM No comments:

What Writing Means To Me

I sit here unable to sleep and must figure out what to do. I try try and wear my brain down by looking over my favorite corners of the internet(Reddit and teh Facebooks) and it's not enough. I love consuming content. Being subscribed to 50+ blogs and 150+ news sites, webcomics and other random things brings a lot of content into my life but at times that's become a stagnant intake. With everything in life there always seems to be some sort of inflow and outflow. Ignoring the biological examples one could make regarding this phenomenon, let's just look at my topic at hand. If all I did was read things, I'd never have the time to talk to/interact with anyone in my life. My wife would leave me, my friends would abandon me(with good reason) and it wouldn't even improve my life. I'd just be too busy to do anything about anything. This is just an extreme example, but it illustrates my point. I desire to speak/write/interact with people on a regular basis(which I want to write as bassist for some reason). The only reason that happens is that I don't make it happen. This fact was reminded to me quite strongly in a conversation we had recently, one for which I am quite grateful, but then, I'm always grateful for my wife. If I wasn't then I wouldn't have married her. Rambling monologues aside, the whole point is that I want to write more, and that I'd love to hear from you, whomever you are, so pipe up, let's all hear what you have to say!

I have started a few other blogs a few other places but they've all seemed to pewter out after just a post or three. I've decided to come back home to here and see if that helps any. I'm going to tell stories, talk about my beliefs (which will likely offend people, I'm almost entirely positive), and basically talk about stuff I love. No matter what, I love talking about stuff, so please comment, tell me what you think, about anything and everything.

Search This Blog, For Crap You Thought You Saw, But Couldn't Find

This Is My Blog 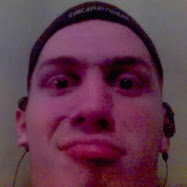 My father once described this picture as the single most unattractive picture of me he'd ever seen. I agree, but still...I kinda like it.